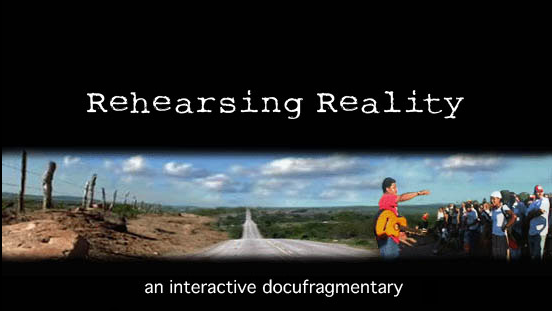 The Docufragmentary Rehearsing Reality is the central element of my practice-based PhD research, which explores and examines the Theatre of the Oppressed’s practices at the point of interaction with peasants of Brazil’s Landless Movement. Some of my initial questions are specifically related to how these drama techniques really work and in what circumstances and conditions they are applied. Furthermore, as my video camera is the main tool to document these drama techniques, can I create an interactive documentary structure that mirrors Boal’s techniques and challenges conventional boundaries of documentary language and at the same time accurately present the answers to my questions?

• To produce a body of work involving text, a video documentary, a website and installation which embodies and exemplifies the research findings.

THEATRE OF THE OPPRESSED
The Theatre of the Oppressed (TO) created by Augusto Boal, breaks with the conventions of the traditional language of theatre. The stage becomes a place where the audience can uncover hidden structures of power and oppression in order to challenge them. The plays always represent (whatever the theme in question) situations with which actors and spectators are confronted with in real life.

The main drama technique the landless practices is Forum Theatre which ‘disrupts’ the traditional monologues that exist between the audience and the stage by allowing them to critically ‘intervene’ and physically ‘interact’ with the experience of the theatre.
The interactive structure of Forum Theatre offers ‘spect-actors’ the possibility to immerse themselves into a reflective process about their personal and social lives. I argue that Forum Theatre is an open medium that offers people the chance to participate democratically in the theatrical space in order to suggest and rehearse new ideas to be applied into people’s lives. Therefore, the experiences that occur in Forum Theatre cannot be considered as ends in themselves; they should rather be considered as new beginnings.

CONTEXT
As a video-maker, most of my previous work has been related to social, cultural, Indigenous and environmental contexts. Since 1997, I have been particularly researching the social and political work of the Landless Movement, resulting in three short video documentaries that have narrated their social and political experiences.

When Theatre of the Oppressed became part of the MST agenda I decided to follow their artistic experience.

My research into Boal’s complex theatrical body of work, involves an
interdisciplinary study ranging from anthropology, cultural and political studies, to new media, art and therapy and ethics.

The experience of using a video camera to observe and document this sort of interactive drama technique led me to think about finding new ways in which we construct film meaning.

Throughout the search to develop an interactive documentary, the Korsakow software used for the creation of database narrative films appeared to be the most appropriate method. Korsakow System runs with a database structure in the background enabling authors (not spectators) to define and create non-linear narratives. The program facilitates different points of view on the same topic parallel to each other.
Korsakow System is the main tool on the development of Rehearsing Reality. It allows the deconstruction of the formal narrative of documentaries in order to create a new type of film aesthetic – an aesthetic involving improbability, disorder, ambiguity, disruption and fragmented thoughts. It offers the active viewer a range of possible perspectives and directions (suggestions) that differs greatly from the kind of meaning presented in conventional linear films.

By creating Rehearsing Reality with Korsakow System, the main radical elements of Boal’s technique are easily revealed: rupture of structure, interaction of ‘spect-actors’ , constant dialogue and interpretation and the making and remaking of scenes.

Rehearsing Reality is formed by a total of twenty sequences that vary in length and approach including elements of space, time, music, silence, interviews and opposing views. By experiencing a constant process of disruption the active viewer encounters a series of fragmented sequences interconnected to each other.

Although Rehearsing Reality offers a way to understand the nature and the rules of Forum Theatre, it also relies on each person’s capacity to comprehend the complex signification imposed by the work upon them. Active viewers are not only introduced to a different theatrical methodology but also to a different cultural reality and to a different way of seeing a documentary. Art here is perceived not as a tool offering a single or definitive answer to problems faced in life, but rather it is presented as a medium, which opens up new channels of thought, new directions which can change the passive status of a spectator into that of an active participant.

The act of focusing a video camera on these theatrical experiences adds a new layer to this sort of performance. It can offer a much greater number of people not only examples of the sort of democracy we are living in but also reflect on the immoral attitude of oppressors towards the oppressed. Further to this, Rehearsing Reality focuses on the social and political role of art and how particular applications of theatre and new media can be used to understand and possibly transform points of view and raise consciousness on contemporary world issues.

OUTCOMES
The actual application of new media, especially the interruptions caused by the structure of the film, not only mirrors Boal’s technique and present answers to my questions but also has become part of an exploratory idea to activate the viewer to enter a meaningful dialogue with the work. Therefore, as much as revealing significant aspects of the subject researched, the docufragmentary Rehearsing Reality contributes to the interactive debate as well.

Researchers may wish to access Rehearsing Reality from the initial research questions and approaches identified above.

QUALITY
The AHRC funded research project was conducted at the London College of Communication (LCC), which is a constituent college with the University of the Arts London.
• Selected by FILE (Electronic Language International Festival) (July/2008)
• Exhibited in Barcelona in a conference entitled Intersections of Theater and Social Change (April 2008)
• Presented by this author to the Landless Movement in the Northeast of Brazil (December 2007)
• Exhibited in Paris, Israel and Calcutta by Theatre of the Oppressed practitioners (2008)
• The University also funded the video exhibition entitled Docufragmentary Research Gallery at the LCC (April/May 2008)

Review 1: Accept work and statement
Simoes makes a brilliant but problematic link between the types of mediated interactivity made possible by web-based digital media, and the egalitarian ideal of Marxist aesthetics. Her project is an attempt to turn the spectators’ online experience-of-the-film into an ergodic analog of Augusto Boal’s spect-actor, which also happens to be the topic / theme of the film itself.

The significant poetic and ideological power of this project resides in the symbolic meaning (the subtextual link between interactivity and social justice) which is achieved by this reflective duality of form and content, which in turn is reflected and vitalised by the powerful spectacle of the struggle of real people to speak and to be heard. The submission has been accepted because of how this intersects with and challenges current debates on interactivity and participation in contemporary culture. Much has been said by cyber-utopians of various flavours about the democratising power and transformative connectivity of web-media, and much that has been said has turned out to be, well, utopian: This work demonstrates both the truth and the limits of these claims.

It’s important to remark the considerable achievement that this symbolic representation of interactivity represents, before I point out that Rehearsing Reality’s aesthetic power does not inhere in a particularly successful ergodic reconstruction of spect-actorship. This is really a linear narrative presented as a non-linear sequence of chapters; no matter which path you take through it, the story is the same, and so in the end Simoes does not achieve the democratic ideal of subverting her own narrative, or allowing the reader to do so. She does achieve some of Boal’s aesthetic and ideological goals, but I think when this mode of mediation/re-presentation is applied to a subject that does not have such a strong thematic resonance with the form, her “docufragmentary” will require a more detailed problematisation of what this ideal digital interactivity might entail, and of what it is not. The aesthetic and ideological coherence of the subject matter and the interactive form, both point toward but don’t quite achieve the Marxist ideal of egalitarian, bi-directional communication that directly opposes the linguistic hegemony of broadcast narrative, of single meanings created by single readings of single signs within single symbolic orders, broadcast from a single source. What they do achieve is Boal’s meta-mimetic reframing of everyday objects in such a way that makes their place in the symbolic order visible again e.g. wrapping a plate in tin foil so that it becomes a symbol for a plate, or wrapping a documentary in a docufragmentary so that it becomes a symbol for hegemony vs. plurality, power vs. justice etc.

I do believe that this very clever project only begins to explore the opportunities provided by Korsakow’s interactive documentary authoring environment, to fragment the constituent elements of video documentary, and to remediate (as in remedy, and as in re-present) those elements as interactive objects within an ergodic phase space. There are ways of doing this that would arguably afford the user various kinds of new, non-spectatorial power over and within the narrative, just as there are ways that arguably circumscribe their agency and in effect create an interactive linearity, where the ergodic phase space contains only choices that reiterate the hegemonic symbolic order.