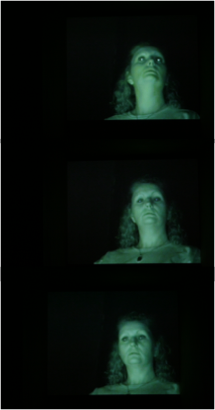 Research statement
Say What You See

As an artist-researcher I seek an immersive structure, so that the experiential encounter sets the foundation for the work. The social structures involved in the documentary process are a starting point for my research. As an artist using documentary to enter unfamiliar territories I am aware that I exert my own agency (as an outsider to the group) and I acknowledge that my camera produces its own set of effects upon subject dynamics. The collaborative potential of documentary is appealing. During filming, it affords the subject of the film the opportunity to share and contribute to the form of the project. However the result of my actions, which affect the camera to zoom, pan or tilt creates a specific subjectivity through framing. The authorship of the work is shared in the making yet it is in the editing process that subjectivities are defined. Each cut is a manipulation that constructs the narrative framework. This has been countered in anthropological filmmaking through exponents of observational documentary who allow the camera to roll (negating the need to cut) and in certain cases deny close-ups and zoom framing (which reduces the partiality of the filmmaker’s impact). This approach produces masses of footage that may display a real-time truth but may be aesthetically unappealing. I am specifically interested in the placement of the artist into an environment that produces its own set of tensions.

What can the artist gain from an immersive, participatory approach and its subsequent effects upon the work? In 2007 I began working with a group of spiritualists in Scotland. I was interested to find out more about the dynamics of communication in the séance arena and to observe the body in trance. Tom and Linda Anderson ofFreedom of Spirit welcomed me to the group as well as my camera. The Switch (2007) is documentation of a trance demonstration, also referred to as cabinet work. This dates back to the early days of spiritualism, in which the medium uses the limited field of the cabinet to build and store psychic energy enabling them tochannel friends and relatives who have passed on. This phenomenon is referred to as overshadowing. In the infra-red light that envelops the medium’s face, (turned green in this case by the low-light function of the camera) there is room for the possibility of doubt produced by the naked eye. The face of the medium appears to show slight changes, and the group’s enthusiasm encourages the eye to strain further to detect these signs. Yet the medium of video returns a flat, rather unforgiving image, that is more representative of the cold reason of technology. It leaves little scope for the potential of the eye to see something Other.

The Switch is a document of the exchange between the sitters (members of Freedom of Spirit) who remain seated behind the camera and the medium who sits inside the cabinet. In November 2007, The Switch was installed at the Camden Arts Centre as part of a series called Dreaming Confusion. A life size cabinet was placed in a blacked-out room into which a small projection of the video played. Unlike subsequent screenings of this piece (including the context of an e-journal) the work was tailored to fit the space. At the start of the event Tom and Linda encourage the group to ‘say what you see’ which allowed the dialogue between the collective body of the sitters (who look for signs of deceased relatives through changes in the face of the medium, and through gestures) to fill the room. My intention was to allow the audience to replace the sitters in an attempt to create even a flicker of doubt in the viewer. Producing a replication of the trance-demonstration helped in part, with a few visitors commenting on the perceptual confusion of the installation and doubt raised by the voices of the members who avidly confirm that they have recognised loved ones.

At the heart of my research is the psychoanalytic term of abreaction. Claude Lévi-Strauss borrowed this key term in his text Structural Anthropology 1, explaining it as ‘The decisive moment in the treatment when the patient intensively relives the initial situation from which the disturbance stems, before he ultimately overcomes it’.

Tom and Linda’s own trance-based communications are reminiscent of Lévi-Strauss’ observations. He notes that shamans in the séance arena were not limited to reproducing or miming certain events. He actually relives them in all their vividness, originality and violence…he returns to a normal state at the end of the séance…heabreacts.’

There is no doubt that Tom and Linda were in an altered state of consciousness; this film is in no way an exposé of the practices of the group (although the green lighting is reminiscent of psychic shows that appear on cable television). The group’s methodology offers new avenues, a contamination of my authorship that challenges me to produce a work that is a mediation of the group and my preferences. The possibility of contamination, as a means towards art production and its reception, follows the logic that: To allow oneself to be Affect(ed) by an Other – by immersing into experience – is to allow oneself to be Infect(ed) by the Other – forming a subjective contamination and opening the potential to learn from another’s approach. My research will endeavour to answer whether abreaction can be used as an effective tool of art production? What are the ramifications for making art that is not based on mimetic reproduction but on an active living or re-living of events?

Michelle Williams is an artist and filmmaker currently researching her practice-based PhD at Goldsmiths College, University of London. Where she also teaches part-time on the MFA Art Practice programme. Williams’ work deals broadly with performance and varies from single frame portraits and video installations, to complex renderings of reality via seemingly more traditional documentary means. She is currently working on a documentary for television Scoring Goals: R(evolutionary) Souls Army, as well as producing a fully functional mass distributed Yoga workout DVD for seniors (amongst other promotional videos). Since 2003, she has been a member of Cinema Suitcase, an international collective pursuing projects of experimental social documentary.

“What can the artist gain from an immersive, participatory approach and its subsequent affects upon the work?” This is Michelle Williams’ research question as quoted from her accompanying statement. She begins to attempt to answer this question in this instance with a filmed séance of a woman in trance channelling friends and relatives who have died and who may be related to members of the audience. This particular style of mediumship is called cabinet work. The medium sits in a cabinet open only on the one side facing the audience and is lit by a soft infra-red light (which appears greenish in this video recording) and which makes it easy for the audience to imagine the face changing so as to resemble dead loved ones. The artist has used jump cuts to edit out many sections of the performance and also used zoom and pan to focus in on different aspects of the spectacle.

As a piece of ethnographic recording I found this remarkable. While we don’t see the audience, their uncritical engagement can be heard on the sound track as they comment while they strain to see facial changes in the medium and to recognise the faces of the departed. It seems evident that the medium herself is undergoing some sort of altered consciousness (rather than ‘faking it’). For a sceptic this video provides wonderful material for showing how such trance demonstrations work. At one stage the medium is getting little response from the audience and says to them that the person they see in her face doesn’t have to be a person close to them; it may be a person they have been reading about or thinking about. (Obviously this provides a very large field of possibilities.) The objective look of the video image which shows little change to the medium’s face, also makes the readings of different faces by members of the audience, look very much like the produce of wishful thinking.

William’s interest is in ‘abreaction’ a term from psychoanalysis and used by Levi-Strauss to explain how the reliving of disturbances through séance may help relieve the stress of such events as the death of relatives. This part of her statement allowed this sceptical viewer to see a value in such performances, which I would usually find worthless or misleading. In itself this suggests the success of this research in beginning to answer the question of how such immersive approaches may prove a gain to the artist.

Williams’ immersive approach also produced a documentary recording which has what has been called the ‘truth effect’. It was impossible to watch this video without feeling it had a very close indexical relationship to the real. This research is about approaches to media research and it does demonstrate to other researchers in the field the ways immersive methods can work. It also shows how using techniques of abreaction, where subjects are asked to re-live life events, may provide an effective tool of art production and social research.