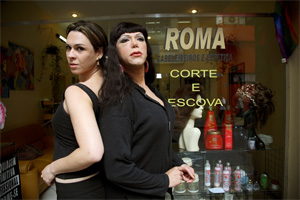 My doctoral study, entitled, Ethnofiction: genre hybridity in theory and practice-based research is a practice-based PhD in Drama at the University of Manchester. The research project considers whether the largely unexplored genre of ethnofictions, as described by visual anthropologist Jean Rouch, offers a means of integrating a hybrid study within drama and ethnography. Ethnofiction is an experimental ethnographic film approach, where the practitioner asks the subjects of the fieldwork to act out aspects of their life-experience in front of the camera in improvisations. This is exemplified in Rouch’s classic films Jaguar (1957-67), Moi, un noir(1958) and La pyramide humaine (1959). The thesis explores ethnofiction, not merely as an indefinable surrealist art practice as Rouch often described his filmmaking, but as a method that consciously draws on dramatic work processes to produce ethnographic research and representation through narrative filmmaking. This research statement argues that a combination of improvised acting, fiction and reflexivity, is a useful complement to contemporary and established methods for ethnographic research and representation.

The research was conducted through what RAE recognises as “practice based, practice-led and practice-as-research”. (RAE 01/2006 (O) 17 Section 3: Criteria and working methods, p 22) According to the AHRC Research Funding Guide 2007/08, the practice in these research projects “must be an integral part of the proposed programme of research, and the creative and/or performative aspects of the research must be made explicit. — The research carried out should bring about enhancements in knowledge and understanding in the discipline, or in related disciplinary areas.” (Version 1.4 May 2008, p 25-26) The research is thus based on the assumption that a greater understanding of the theoretical and methodological aspects of ethnofiction could be achieved by making a film where the practice informs the theory and vice versa.

The theoretical research of the project was predominantly conducted during the initial stage of the PhD. It was aimed at developing a theoretical context for the use of fiction and drama in ethnographic filmmaking through interviews and archival research on Rouch’s filmmaking. The research outcome defined certain characteristics that distinguish ethnofictions from other films that apply similar approaches, and suggested a generic methodology for the practice of ethnofiction.
I concluded that ethnofictions are based on ethnographic filmmaking methods and they are produced as shared anthropology in a collaborative, sometimes reflexive spirit, using certain traits of improvised filmmaking to draw on the improvised acting of the protagonists.

Ethnographic Filmmaking
Ethnofictions are based on an extended period of ethnographic fieldwork and are made by a small camera team to reach a high level of intimacy with the protagonists.

Shared anthropology
Ethnofictions are created in a collaborative spirit between the ethnographic filmmaker and the protagonists who participate actively in the creation of the film by suggesting their own ideas. Informant feedback improves the ethical approach and provides a second opinion on the findings of the ethnographic research. Rouch often screened a rough-cut of his films to the informants to receive feedback and the protagonists sometimes improvised the narration to the film rushes during the final stage of the production.

Reflexivity
Rouch pioneered self-reflexivity in documentary filmmaking. He often participated in his own films in dialogue with the protagonists, who sometimes were given the opportunity to participate in the film with their own critique.

Improvisational Cinema
For Rouch, the process of filmmaking was a ’ciné-trance’ where he no longer made any difference between the camera, himself and his environment. Ethnofictions are improvised; in dialogue with his environment the ethnographic filmmaker follows his protagonist into a fairly unplanned film production. Rouch called this approach ‘Pourquoi pas?’ (‘Why Not?’) after the Arctic explorer ship on which his father was the captain. The process of filmmaking was a discovery in itself, where the story was invented as he went along. Rouch also used the camera to create ‘ciné-provocations’; the camera became a catalyst, provoking dialogues and actions that otherwise would be hard to reveal.

Improvised Acting
The protagonists of ethnofictions act out their cultural knowledge in front of the camera. These improvisations are created along themes dictated by the ethnographic research, and are based on the protagonists’ own experiences and impressions from their environment. Rouch’s ethnofictions were not limited by reality, but inspired by the surrealist and poetic view that was typical of all his productions. Rouch compared these improvisations with psychodrama – by projecting their experiences through fiction and drama, the protagonists revealed cultural aspects as a part of the ethnographic research project.

Following the background study I tested this methodological approach during 15 months of ethnographic fieldwork in São Paulo that resulted in an ethnofiction about transgendered Brazilians. Brazilian transsexuals (males-females) and travestis have been males that have adopted a female appearance. While transsexuals (male-female) identify as women, Brazilian travestis identify neither as men, nor as women; but mostly just as travestis. Brazilian transsexuals and travestis often work as prostitutes and suffer from intolerance which is why the ethnofiction Transfiction came to focus on identity and discrimination in the daily lives of transgendered Brazilians. In the film Fabia Mirassos projects her life through the role of Meg, a transgendered hairdresser confronting intolerance and re-living memories of abuse. Savana ‘Bibi’ Meirelles plays Zilda who makes her living as one of the many transgendered sex workers in São Paulo, as she struggles to find her way out of prostitution.

The PhD is weighted 50/50 between theory and practise where the theory consists of the 50.000 word thesis and the practice of the 57 minute ethnofiction and additional documentary research clips extracted from the 200 hours of mini-dv rushes that were produced during the fieldwork. These documentary scenes were used as a point of reference for the research on ethnofictions and were given the working title of Drama Queens since this research focused on Fabia’s and Bibi’s life on and off stage at the theatre Os Satyros in central São Paulo. (http://satyros.uol.com.br)

The expressive function of acting in ethnofictions stands at the centre of the research and could be described as a collaborative effort between filmmaker and protagonists, where the protagonists have the opportunity to use their imagination to reflect on their own experiences and cultural context through improvisations. Unlike applied theatre and participatory video, the expressive function of ethnofiction is not devised to support or facilitate the lives of the participants of the project. Instead, ethnofiction draws on the participants’ willingness to discuss and realise their existence through improvised enactments within a fictive framework, where the ethnographic research and representation form the primary objectives. Unlike other more conventional forms of ethnographic research, the informant transgresses the role as the observed to become a co-author of the representation. The filmmaker is more than a mere observer; his or her presence with the camera is used as a catalyst to reveal the inner life of the protagonists, such as dreams and desires, through ‘projective improvisations’. These aspects of the informant’s identity within the socio-cultural context are usually difficult to research and represent through conventional ethnographic research methods such as participant observation and established interview techniques.

Review 1: Accept work and statement
Transfictions (Sjöberg, 2007) epitomises a kind of hopeful utterance that speaks volumes about the time and space where it was made: a hope that arises at the intersection of the affordances and possibilities of the digital media ecology (or of post-digital “technicity”), and the same epistemological aporia – the problem of voice vs. gaze and it’s relationship to truth and agency in cultural hegemonies – that inspired one of Jean Rouch’s most interesting experiments in inverting, subverting or interrupting the power relationships encoded into anthropological documentary production – the “ethnofiction”. As with all of Rouch’s experimental forms, reflexivity and a participative/anti-hierarchical ethos are integral to the method, but what distinguishes ethnofiction from other modes of “documentation” is its focus upon collaborative improvisation and fictionalisation, and the idea that an “ethnological truth” that would elude the epistemological gaze of a documentarist, might be invoked by descriptive and expressive re-enactments of the everyday, by people who have a deep existential stake in that everyday.

While highly portable, relatively inexpensive digital video production tech has made it possible for under-represented and misrepresented subject positions to find a “voice”, and while the experience of voicing one’s being can be most liberating and personally empowering, the question remains: Who are these utterances intended for, and what meanings might they ultimately accrete to themselves? More bluntly: How might exercises like this contribute towards increasing the audibility/visibility and agency of culturally repressed or oppressed communities and individuals? It is debatable to what extent the participants in Transfictions are empowered by being given the opportunity to reflect upon and represent their experience, and what kinds of power the process bestowed upon them or allowed them to discover in themselves. Certainly, the film succeeds in revealing the everyday experience of prejudicial exclusion, cultural repression and physical oppression suffered by trans-sexual and transvestite people in Brazil, reflects upon its causes, and powerfully articulates the emotional and psychological impact this experience has upon those who endure it. These events and self-perceptions are precisely the kinds of “ethnological truths” that would be veiled by the presence of a documentarist, because the gaze of the camera would distort the performativity of all involved: it’s a reality that shies away from documentary.

Rouch’s faith in the liberative potential of (analytical, reflexive) self-performativity is akin to Augusto Boal’s spect-actorship, which in turn is a refinement of the aesthetic and ideological aims of Brecht’s polemical theatre: deny the audience the conventional receptive passivity of spectatorship, and instead provoke an empowering verfremmdung, a communally created “alienation from representation” that is actually an antidote to alienation in the proletarian-individualist sense of this word. Though their methods and aims differ in important regards, these three theorists all share a faith in an actively creative, analytical relationship with what is being represented, and a belief in the “power” that can be discovered in the process of developing a communal culture-critique, or engaging in a participatory existential-analytic of one’s (intercorporeal) identity and (shared) experience… What would “complete” the project hinted at in Transfictions (or realise the hope it embodies) is this repetition-duration and communalisation. As a lone voice in an antipathetic wilderness, it has aesthetic power (pathos and hope) but very little cultural agency. As a popular or counter-culture genre or ongoing social project, with its own networks of distribution and production, and a meaningful strategy of integrating those networks into mainstream culture, it could be a very powerful tool indeed for raising awareness of the continuing reality of social repression: the antithetical perfection of (and perfect antidote to) the voyeurism of Reality TV…