What is (and isn’t) screen media practice research?

This is a discussion piece around a submission we have decided not to publish as peer-reviewed screen media practice research, but which we thought was nevertheless worthy of dissemination. The submission by Adrian Miles (RMIT University) consists of documentation of the 2015 Visible Evidence documentary conference panel on “The Aesthetics of Documentary interactivity” as an iBook (also available as a pdf). 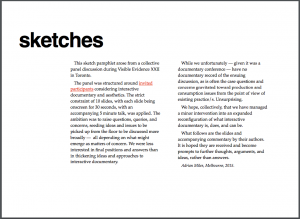 The submission invites us to explore definitions of practice and research in interesting ways. The editorial team thought overall this was an interesting submission to consider, which offers a useful case study for us to discuss and identify what the parameters of the Screenworks website are.

Looking at the submission itself, the statement and the two reviews, we feel that this does not constitute a practice-as-research submission and, although it is a useful documentation of a very interesting conference, we feel that it is not particularly innovative or remarkable as an iBook nor in terms of its interactivity.

However, we were intrigued by the framework and the contours within which the submission was outlined – as a “mixed media academic sketch / pamphlet that falls to one side of the confidence and closure of the finished academic essay but is more solid than conversation and debate”.  As such it could offer readers inspiration towards an innovative and elegant way to document presentations around a common theme.

That said, we are not entirely convinced that this was fully articulated in the work itself as it was difficult to distinguish the work, as the reviewers have said, from a series of (well-designed and interesting) slides drawn from a presentation. In that sense it does feel somewhat premature as a submission making any grander claims as a piece of publishable practice-led research.

It seems as though the submission is being defined as a new and experimental way of presenting academic research but where the experimentation arises from a relationship to conventions and expectations of written academic research publications rather than a creative arts/screen-based practice research.

Perhaps we need to create a space on the Screenworks website to ‘house’ such an intervention in traditional academic writing, where we might invite future submissions relating to experimentations with written academic work? Or, might this be stretching our chosen remit too far? In terms of what is and isn’t a piece of screen media practice research – we want to be open to all kinds of screen-based submissions, not just traditional film and video and welcome interactive, cross-platform, artist-film work – as long as the statement can clearly be articulated as practice research.

We thrashed this out as an editorial team and have ultimately agreed that this submission does not fit within the scope and reach of Screenworks as a publication of practice research. However, we have decided to create this ‘Discussion’ area on the Screenworks website in order to explore these and other issues – this will not be a regular blog, but a space where we can disseminate work that might not fit within the traditional parameters of ‘screenwork’, and where we can explore current issues relevant to practice research, research assessment, peer review and impact.

We include the statement and reviews here, with the permission of the author, not only so that this documentation of an interesting conference can be disseminated, but also in an effort to shed light on the peer review process and the perhaps porous membrane between screen media practice research and innovative forms of academic e-publishing.

The Aesthetics of Documentary Interactivity has two key research questions. One is directly related to interactive documentary while the other engages with experimental forms of documentation and writing for screen based academic practice.

That the mix of still image, video, text and presenter’s slides within the iBook provides in itself suggestions for other varieties of scholarly practice in cinema studies more broadly. Ideally it is the iBook that should be viewed. It will work on recent Mac OS (if you have the iBooks app on your Mac then it will work) and on iPads. It has not been authored for iPhones. The pdf is a video free alternative of the same content.

EXPERIMENTAL ACADEMIC PRACTICE
Subsequent to the workshop the panellists were invited to contribute the text and slides of their presentations and any contextual (location specific) media to be edited into a multimedia pamphlet. The intent of this facet of the research was, in much the same manner as the panel itself, to be a provocation and proposition in relation to more formal and closed forms of academic publishing and documentation. The pamphlet explores the possibilities of taking advantage of Apple’s freely available iBooks Author as a simple way to develop an artefact that is part field notes and part documentation that can also easily include different media. As a pamphlet it appropriates for itself the agility and informality of the political pamphlet and so, much like the conference panel, is intended to be a mixed media academic sketch that falls to one side of the confidence and closure of the finished academic essay but is more solid than conversation and debate.

Context
This work continues an academic ‘sketch’ tradition explored by the research practitioners of RMIT’s non/fictionLab. Previous work includes “Essaying the Fabpod: An Improvised Experimental Collaborative Account of the Uncertain Cultural Life and Futures of the Fabpod, as of August 21, 2014” and “Quickened: A Lyrical iBook for Postindustrial Doing” (both published in Axon).

The content of the pamphlet is a contribution from a range of active scholars to discussion and debate about interactive documentary. It advances work in this field by the broad propositions being made, which it offers as points to engage with, rather than complete arguments. In relation to academic practice this work continues recent experimental practices I am exploring around alternative varieties and practices of creating academic knowledge objects, with a particular interest in the significance of these knowledge objects for Media Studies, Cinema Studies, and related disciplines.

This work continues my long history of adopting ready to hand digital technologies to pedagogical and research ends. The content of the pamphlet reflects my research into interactive documentary, including establishing the new documentary email list, and numerous recent publications.

Methods
The iBook is informed by communication design, while the pamphlet represents a diverse range of theoretical positions. However, they are all derived from or intersect with cinema and cultural studies, and new media studies.

Outcomes
The work offers an example of an agile, media rich way to document and disseminate research activities and practices. Theoretically it offers a broad range of propositions about interactive documentary, interactivity, and aesthetics.

Dissemination
The work is based on a themed panel presented at the Visible Evidence documentary conference held in Toronto in 2015. The panel proposal was subject to peer review. The work has received some funding via RMIT’s non/fictionLab.

Impact
My work is relevant to pedagogy, media industries, digital humanities, and cultural development. The impact it has I believe is best left for others to determine.

Review 1: Invite resubmission with re-edit of work and/or statement

I’m afraid that I do have an issue with this submission as a piece of practice-led research, in that is essentially documentation of four short presentations on a panel convened at Visible Evidence.

The author’s statement says that it is innovative, in that it is an example of an agile, media rich way to document and disseminate research activities and practices. Whilst I can agree with this, and appreciate that no overblown claims are being made here, I just wonder whether this is what Screenworks wants to be publishing. My issue here is that four presentations put onto Slideshare would not make it into a peer reviewed research journal on practice-led research, nor would four video recordings of the presentations uploaded onto Youtube, so why should this? The work is nicely presented and iBook is a good format for collating this content but without further analysis and discourse how can it be anything more than a new way to distribute conference presentations? I would be happy to see this published in Screenworks if it was positioned as thus – but think that care should be taken not to present this submission as being anything more substantial. If this were to be used as a trigger for a wider piece of research on what we mean by interactivity, then all well and good, as it is an interesting and relevant academic intervention, but that would be the research project and this would be it’s starting point.

Nb. As an aside, I take issue with the author’s comment that our understanding of documentary relies on existing cinematic conventions – as if that is relatively unproblematic. Julie Fischer’s MSc dissertation is worth reading here, as a way in to reframing what we mean by documentary through looking at its broader traditions.

Review 2: Invite resubmission with re-edit of work and/or statement

This innovative collection of presentations addressing the aesthetics of documentary interactivity is a very welcome contribution to scholarship in the field. Reflecting a panel at Visible Evidence 2015, the four invited contributions brought together in the ibook offer diverse takes on the meaning and value of interactivity, acting, as Miles argues in his statement, “to thicken and make denser the ways in which interactivity can be theorised, considered, and applied within interactive documentary”. Miles’ invitation has generated theoretically strong, thought-provoking responses which go to the heart of what matters about interactivity for each of the panelists, and require the reader to reflect anew on what is at stake in the field. I would have no hesitation in recommending the collection for publication, however, I’m unsure as to whether the collection is a valid submission for Screenworks.

This is an ebook which uses Apple’s open access iBooks Author publication platform. As a media experience the ibook is unremarkable, and not intended to be so. There are a couple of embedded video clips, but there is no interactivity beyond flicking through the slides or clicking on the video. As an experience it is akin to flicking through a well laid out pdf, which will be the format Miles proposes for publication on Screenworks. This is an aggregation of a set of conference slides, rather than a new work derived from those slides, and Miles is the editor rather than the author of the whole.

Miles describes the work as a “sketch pamphlet” and situates it, reasonably, within a tradition of pamphleteering – an agile and fast turnaround form. The work constitutes practice-based research into a format for academic publishing somewhere between the conference conversation and the formal published paper. Again, this is valuable, but it is work addressing publication innovation than an original creative work of the kind Screenworks has published to date.

I won’t make a formal recommendation at this point. It seems to me that Screenworks needs to consider whether the submission can be accommodated. I hope that it can.