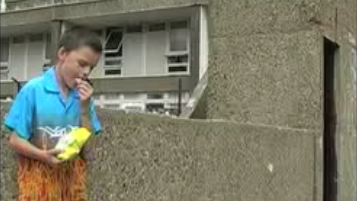 To open the film in a new window click here: http://www.adamkossoff.co.uk/AK/Goldfingers_Playground.html

My PhD ‘On Terra Firma: Space, Place and the Moving Image’ examines the moving image as a medium that both depicts space and place and positions the spectator towards varying levels of space and place. My thesis is premised upon the idea that the spatiality of the moving image can be characterised as thin space. This concept is developed in contrast to the idea thick space. The latter is concerned with space as experienced, the former with regard to the moving image’s ability to sustain a feeling of space. Bernard Stiegler argues for the central importance of techné, or technics, whereby the inorganic cannot be conceived outside of the organic, and vice-versa. Thus, ideas of the moving image as a machine for mimetic reproduction informs my examination of the spatiality of film as a space that lures the spectators inside, while retaining its outside at the same time. It is these varying degrees of space that I term thin space.

One aspect of my thinking around space and place in the moving image was the centrality of rhythm. Following Stiegler’s theory of technics and mnemotechnics, rhythm makes explicit the relationship between the organic and inorganic. “Writing in general… was firstly a site of measuring… as the archaeologists of Babylon have shown concerning the rhythms of flooding. Consequently, should one say that writing is a clock…?” (Stiegler, 1998a, p.223) Added to this idea of technics, in the moving image rhythm arguably brings together time and space in an overt way, calibrating the near and the far, presence and absence, overcoming the current propensity in film theory to idealise film as a durational form.

Partly as a result of writing my thesis and exploring the relation between technics and rhythm one of my PhD films, Playground (2004), was remade into Goldfinger’s Playground (2007). Originally, Playground brought together two concerns; the movement of the camera through space and the ‘mapping’ of the image with the frame. The subject of the film Balfron Tower, built in 1967 in East London, by the architect Ernö Goldfinger. One of the fascinations with Balfron Tower is its concern with visuality and containment, and the relationship between the two. The latter provides it with its famous architectural reputation, the former its problematic social reputation, despite the distinctive interior design of the flats themselves.

Through the use of framing and re-framing Playground narrativised the geography of the space, revealing a path from outside the playground area, into the interior of the playground. The framing of the image is central to the exploration of space in the Playground. It reveals a progression, a sequencing of shots, showing how the ‘compositional’ desire of the architect dominated the needs of those who the playground was designed for. The exaggerated framing of the image also shows that there is a beyond to the image, an outside as well as an inside. Playground is also purposefully single screen, in that its focus is the coherent sequencing and re-framing of one set of images from a single point of view. Playground was shown together with two other works, Surface Area (2004) and Dust in the Laundry (2004), both about Balfron Tower in the modernist home that Goldfinger and his wife built for themselves in Hampstead, known as 2 Willow Road. It is a National Trust House and there is an exhibition space in what was the children’s nursery. Thus, the work, linked by Goldfinger, referred backwards and forwards, from the gentrified space it was being sited in, to the depicted, inner city, spaces of Balfron Tower.

In the latter stages of my PhD I re-edited Playground and it became Goldfinger’s Playground. I not only followed Goldfinger’s ‘pictorial’ logic by re-framing every shot, I also introduced a different editing scheme, whereby the rhythmic associations are ‘induced’ by the background sounds. The shots were edited according to the sounds on the sound track, which further serves to identify an invisible outside to the frame, as well as its visible inside (i.e. the seen image). Paying attention to work by Hollis Frampton and Peter Gidal (for example), it is apparent that this rhythmic quality makes itself more obvious in the work of experimental, non-narrative filmmakers from the structuralist-materialist movement of the 1960’s and 1970’s, filmmakers who openly engage with the technological mediation that allows the mimetic image to come into being. The strategy of revealing the technological base of the moving image also recalls the influence of Kurt Kren’s Trees in Autumn(1960); the regularity of the shots moving through the forest, where the beat of the interval within the shot, as well as between the shots, is relayed back and made visible to the audience. The rhythm is a constructed regularity, a non-hierarchical reflexivity that emphasises the interval, which, according to Dziga Vertov allows one to consider the beat of the shot as an inherent part of the technique of the moving image.

Goldfinger’s Playground looped background noise forms a rhythmic, machine driven, image-soundtrack, indicative of the nature of prosthetic space-time orientation. It reveals a to-and-fro relationship between absence and presence, an opening out of the ‘has-been’ (the archival) of the moving image and its claim of ‘being-there’. In narrative cinema this idea of embedded memory is obscured, whereas when the rhythmic is foregrounded, where the written is foregrounded, the play between presence and absence reveals the technics of the moving image.
Consequently, Goldfinger’s Playground developed from a given theoretical standpoint (issues around rhythm and technics), structured from a spatialised form of perception. It evolved from another work that was shown in the domain of exhibition and screening spaces, (for example 2, Willow Road). It is also reflective response to various film-making strategies (structuralist filmmaking as well as Russian and early French film theory). It therefore works to demonstrate a focused engagement with the ideas space and place in the moving image and that of thin space, the central term that informs the theoretical core of my PhD.

Bibliography
Kossoff, A. (2007) On Terra Infirma; Space, Place and the Moving Image, PhD thesis, Royal College of Art, published by VDM: Verlag in 2008.
Stiegler, B. (1998a) Technics and Time; The Fault of Epimetheus, trans. R. Beardsworth and G. Collins, California: Stanford University Press

Review 1: Accept both film and text

Of late the art and architecture schools of the UK have renewed their interest in phenomenology and in many ways this is a good thing. It encourages the producer to scrutinize the nature, or even moment of apprehending the world of stuff, things, space, asking, always, what is experience made up of in the sensate moment. Such is one part of the background to this study and the supporting statement directs us towards such concerns in thinking about ‘thick’ and ‘thin’ space.

I agree that the binary thick/thin has some purchase in describing how space is apprehended through and in the technic of film. But this is from a formal point of view, necessarily because it is considering film form. From my point of view herein lies the danger of a formalism or a formalist solution, which I think the project of this film and its theoretical approach gets horribly close to.

The human apprehension of ‘organic thick space’, is of course continuous and analogic, humans can only separate themselves from continuous space as an act of imaginative thought, and interesting enough the most immersive virtual spaces follow the logic of the analogue. The apprehension, or rendering, or, dare I even say, representation, of film space is, on the other hand precisely discontinuous, and hence I suppose ‘thin”. Film space relies on the discovery of the persistence of vision which allowed the eye/brain to read movement and hence space in film, just as the fixing of the ‘latent’, photographic image formalized the registration of perspective in photography. Beyond this ‘technical apprehension of space in film everything is a matter of cultural convention and it is here I think the film invites us to go beyond the formalist theory and practice is deploys – i.e. rhythm, pacing, sound leading the image and the cropped sequencing of images on the black screen.

The moving image as ‘a machine for mimetic reproduction’ is a strong approach to the consideration of spatiality of film’, but, ‘as a space that lures the spectators inside, while retaining its outside at the same time’, is a hard and tricky act, which the purely formal language deployed doesn’t sustain and asking rhythm to do all of this is asking too much of the convention, i.e. can it really in ‘bring together time and space in an overt way, calibrating the near and the far, presence and absence, overcoming the current propensity in film theory to idealise film as a durational form’.
The other convention, of mapping the image within the frame is equally in danger of a formalist resolution of how to represent the continuousness of spatial experience in film. Here we might consider that what we have been presented with is a slide-tape, an analogue technical and cultural form, which ‘animated’, ‘serialised’ and culturally ‘narrativised’ the still image. Here the space of the photograph is not the space of film, which is the organisation of space as window on the world, i.e. photograph space aims at transparency. Would the technic of photography need revealing in the logic of this film? To the degree to which the photograph is masked then the convention of framing and point of view is revealed.
It is through the photographic, and not the filmic that the audience can enter into the space of the meaning of the architect, Erno Goldfinger’s social housing tower blocks. Here the photography and its filmic sequencing does say something about ‘how the ‘compositional’ desire of the architect dominated the needs of those who the playground was designed for. The penultimate, looped shot, of the boy eating his chips says it all. Here the theorisation of space and place provided by Doreen Massey, a critical social geographer would serve as an opening out of the phenomenological maze.

Cropped framings of views around Balfron Tower, East London, designed by the architect Erno Goldfinger are montaged and cut in a four minute video sequence which evidences and explores Kossoff’s examinations of ‘the the moving image as a medium that both depicts space and place and positions the spectator towards varying levels of space and place’. Notions of rhythm are explored in both the visual cutting style and in repetitive sound edits whilst ‘narratavising the geography of the space’ being filmed.
Supporting Statement

The Supporting Statement clearly contextualises the work and Kossoff’s PhD thesis concerns central to this work, which is a direct exploration of those concerns and arising from them.

Research Question
The Research Question is clearly stated in the opening paragraphs of Kossoff’s Supporting Statement. Kossoff concludes,
“Goldfinger’s Playground developed from a given theoretical standpoint (issues around rhythm and technics), structured from a spatialised form of perception. It evolved from another work that was shown in the domain of exhibition and screening spaces, (for example 2, Willow Road). It is also reflective response to various film-making strategies (structuralist filmmaking as well as Russian and early French film theory). It therefore works to demonstrate a focused engagement with the ideas space and place in the moving image and that of thin space, the central term that informs the theoretical core of my PhD.”

Context, Methods and Criteria are all clearly addressed in Kossoff’s supporting statement.

Outcomes and Quality are evidenced in the completion of his thesis and its subsequent publication by VDM:Verlag (2008)