Volume 8.2: Digital Ecologies and The Anthropocene 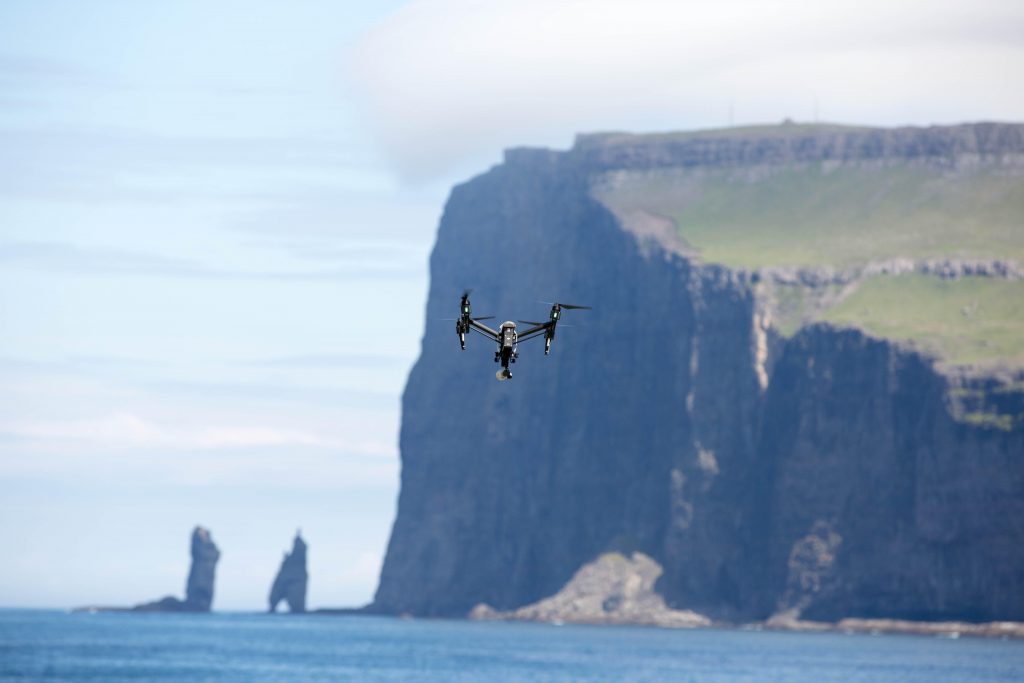 We are pleased to publish six new practice-research works for this special issue of Screenworks focused on relationships between digital ecologies and the Anthropocene. The volume emerges from a symposium of the same name which took place at Bath Spa University in April 2017. Approaching the Anthropocene as a space for generating new political arguments, new modes of behavior, new narratives, new languages and new creative forms, the symposium focused on bringing some of the emerging discourses surrounding this theme to the surface across theory and practice. An international call followed the event and this publication brings together research first presented during the symposium with submissions received from wider practice-research communities.

The work featured in this issue draws upon a diverse range disciplines encompassing performance art, experimental and documentary filmmaking, music composition and digital art. Although varied in form and context, all of the contributions explore relationships between the natural environment and human activities, shedding new light on these complex entanglements through technological and aesthetic experimentation. The connections between media technologies and ecology are a predominant interest amongst the artists who explore or remediate the physical environment in their attempts to critique digital infrastructures and make explicit their dramatic environmental cost.

Climate change and conservation are recurrent themes throughout the work gathered here. Several of the artists visualise explicit risks to the natural environment through their exploration of rarified habitats such as the raised peatbog in Ceredigion, Wales, a colony of Aspen trees in Utah, USA or an ice-covered lake in Kilpisjärvi, Finland. Spanning these diverse geographic regions, the issue presents creative investigations dealing with the stark and urgent reality of a lasting impact on the planet caused by human activity and particularly digital technologies. Across these contributions, it is specifically the poetic or non-linear nature of experimental moving image work that allows an exploration of notions such as “hyper-objectivity” – to engage, both aesthetically and politically, with the imagining of objects that defy imagination. Through doing so, the artists indicate the extreme physical scale and timeframe inherent in questions of environmental change in contrast to human experience.

Adam Fish’s film Points of Presence exposes the materialities of digital technologies and their vast networked infrastructures operating above and below the earth. The film employs aerial and terrestrial videographic approaches to map the physical reality of the internet and bring into view the sources of material power. By revealing data centers, undersea cables and other unseen or overlooked technical architectures that afford contemporary communication, Points of Presence shows the rich complexity and precarity of the North Atlantic region’s intranet infrastructure. In so doing, this contribution grapples with the wider problem of visualising information flows and, through intentionally leaving out the human voice, attempts to present an alternative non-anthropomorphic perspective to its subject.

A landscape performance by Annette Arlander, entitled Day and Night with Malla, visualises the contrast of geological time against human time. Throughout this exquisitely framed video documentation the artist’s durational performance is juxtaposed against the subtle ecological changes of a shifting landscape. Drawing upon new-materialist theory, the work questions the nature of performance and also investigates how an artistic practice might disrupt the material world. The video presents its subject through the same framing over several two-hour intervals which break the continuity of the world for an audience, creating intrigue about what else might be left out of the frame. Hence, the initial performance and video work presented here both attempt call into question human relationships to the environment and problematise conventional notions of nature itself.

The experimental film Y Gors/The Bog by Anne Marie Carty, Nick Jones and Dafydd Sills-Jones that addresses the impact of farming activities and land drainage in an ancient raised peat bog. The project focuses on musical composition and uses the film’s soundtrack as a way to explore connections between communities and their environment. Created in collaboration with a village choir based on the edge of the bog, the film engages with the local community to produce a depiction of the use and loss of water systems and its relevance to nearby populations. The project draws together stunning audiovisual evidence of the landscape with this direct human insight in a manner described as “ethno-sensory” to reflect on connections between landscape, community and technology.

Garfield Benjamin’s interactive online video Googling the Anthropocene repurposes Google Earth as a tool for viewing and confronting ecological damage. Existing within a web browser, this work relies on automated scripts which continually generate and display new satellite imagery from Google Earth at different magnifications and coordinates in order to reveal the limited grasp and perspective of the planet this technology can offer. Drawing heavily on posthumanist theory, the project experiments with digital media as a way to tackle ecological issues and explores the tension between interactivity and automation in a provocative manner which disrupts ingrained routines of knowing and understanding the world.

Alistair Oldham’s interactive contribution Wrecked on the Intertidal Zone documents an art project about the environmental destruction of the Thames estuary. The work is comprised of numerous short video clips in an online gallery, each experimenting with different audiovisual methods to represent the diverse artistic interventions that YOHA and Arts Catalyst made within the polluted habitat. This compelling, eviscerated documentary project reveals the impact of industrialization on the environment as well as the communities that it has traditionally supported. Oldham’s decision to employ an interactive gallery and diverse filmmaking approaches also shows how the documentation of artistic practice can go beyond a simple record of process and contribute to the discursive value of the project.

In The Trembling Giant, Patrick Tarrant inserts a 16mm projector reel in front of a digital camera which films the Utah landscape, utilising a media archaeological and hybrid filmmaking approach in an attempt to bring Morton’s notion of the hyperobject into view as it interacts with lenses, focal planes, optics and perception. This is manifest in the unique optical phenomenon caused by filming through a 16mm projector that animates the bokeh within the image and deliberately conjures a comparison to the dual functionality of the Lumière brothers’ Cinématographe, which also combined camera and projector into one apparatus. The strategies employed in the film allow the work to express its own digital materiality and its connections to the Anthropocene, intersecting with a sense of geological time.

Using a range of practice-research approaches the contributions in this issue all creatively engage with the Anthropocene and surrounding theoretical concepts in order to reveal environmental implications of digital and virtual technologies by tracing their material realities. This issue also coincided with our inaugural Screenworks event, a showcase screening at the Cube Microplex cinema in Bristol on 20th June 2018 that was generously funded by the MeCCSA Practice Network. 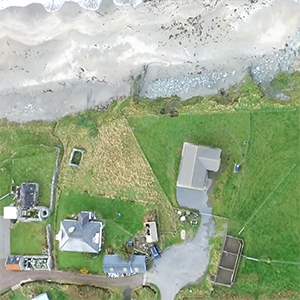 An experimental documentary that explores the physicality of the internet across the North Atlantic region through aerial and terrestrial cinematography.
Read more…

Day and Night with Malla 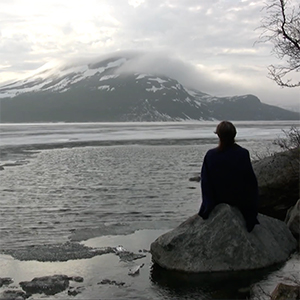 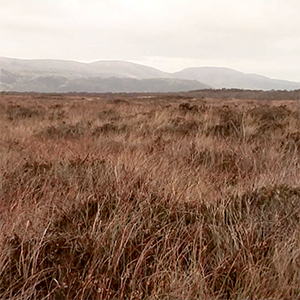 An experimental documentary soundscape about the impact of farming activities and land drainage in an ancient raised peat bog created in collaboration with a local choir.
Read more… 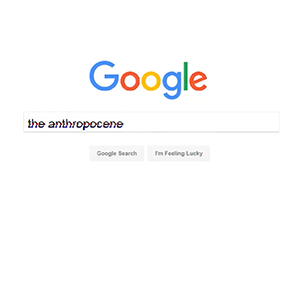 Wrecked on the Intertidal Zone 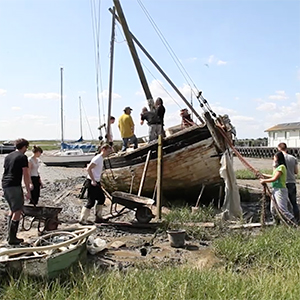 An interactive online documentary that creatively depicts YOHA and Arts Catalyst’s environmental art project about the destruction of the thames estuary.
Read more…

The Trembling Giant as Hyperobject 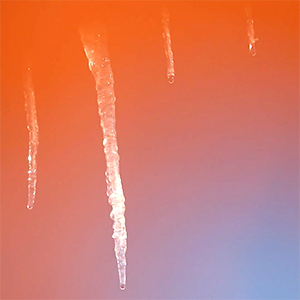 This volume is supported by the Digital Cultures Research Centre at the University of the West of England, Bristol and the Centre for Media Research at Bath Spa University.